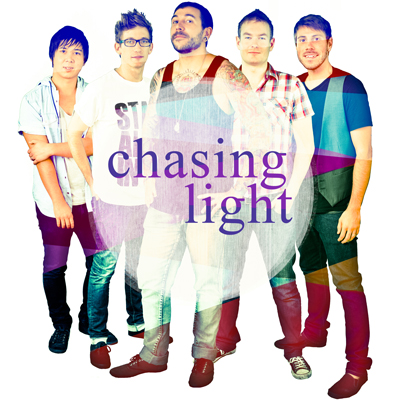 Who Is Chasing Light?

An energetic stage show, fast riffs, epic beats, sweet melodies, with a touch of screamo – Chasing Light is one not to be missed!
As the name implies, Chasing Light, operates with a strong social conscience. They are careful to source ethically traded merchandise, write meaningful lyrics and are committed to supporting those in need through our partnership with Compassion Australia.
After already launching two successful EPs over the past three years, Chasing Light will release their debut full-length album, ‘The Story of a Man’ in April 2011.

Here is the insider story of what happens behind the scenes.

Writing-
We spent approximately six months writing for the album. Band members would bring ideas into a rehearsal studio where we would jam them out. Over a few weeks we would work on the structure and record a live recording so that lyrics and melody could be written for it. Lyrics would typically be written before the music bed was completed and an appropriate set of lyrics would be adapted for the particular song. A melody would then be written outside of the rehearsal studio and then brought in for a full rehearsal.

Pre-production-
We spent two months on pre production, where we demo recorded all the songs in our home studio. Before recording we locked down the tempo and then we lay down the drum tracks on a midi based drum kit. After which we recorded bass, guitars, keys and finally vocal parts. After pre production was complete we got together to review the tracks and make any changes accordingly.
We recorded the demos in Pro-tools so that we could take the tracks in to the studio to use as guide tracks. This saved us a lot of time and money.

Recording-
We recorded our album at Electric Sun Studios in Sydney with Producer/Engineer Shane ‘Buddha’ Edwards. This is where we had recorded our previous two EPs and we are very happy with the quality and work ethics of the studio. Recording and mixing took place over 10 days. We then took the mixed master album to Sony for mastering.

Artwork-
Originally we had decided to use photography for our artwork but we came across a local illustrator that had quite quirky and interesting drawings. We approached him to draw up some ideas. After talking though the concept of an old man sitting on a porch he went away to work on it. A week later he returned to us with some sketches. He was pretty much on the ball with our original concept so we let him go ahead and design the layout also.

Printing-
We decided to release our album as a digipack. The previous two EPs were 8-page booklets in a Jewel case and although they looked great we wanted to do something a little different. After gathering a few quotes, Austep had submitted the most cost effective option so we booked in to replicate 1000 copies. We were offered the opportunity to print onto 100% recyclable paper and we are really excited to see the result, as the texture will really suit the artwork.
Promoting The Album

We approached a local photographer from Esjay Creative, to take some promotional shots for our social and print media. This took place under studio lights with a chroma-key back ground so that we could have full control over the image. It also gives us more options with how we can present the photos. Esjay Creative is also designing our launch and tour poster for print and digital delivery.
After the photo shoot we updated our social media sites; Facebook, MySpace and Reverb Nation. Traditionally we have hired a designer to do this but to save money we kept the design simple and did it ourselves. At this time we also launched the single, Closed Hearts, as an album preview, where the song could be streamed for free.
We have developed an EPK (Electronic Press Kit) that we will send out to various radio stations, booking agents, labels and street press. It includes a biography, information about the album, promo photos, music files and lyrics.
A couple of weeks before the launch we have booked in to shoot a second music video. I (Tim) am a video producer so I will butter up some work colleagues to assist on the shoot and edit it myself. We will send this to RAGE and other music video programs. The main place that we will use this though is online.
On the lead up to the launch we will send the album out to radio stations and promoters. One week before the launch we will release the full album on iTunes with Reverb Nation as our digital distributor.
We have booked the Bald Faced Stag Hotel for our launch show on the 16th of April. Supporting us is local band, The Initiation, and DJ John Mark will host the after party.
We have started booking a tour for the few months following the launch; in Queensland, Newcastle, Canberra, Bega and around Sydney. The first show being Easterfest, Australia’s biggest Christian music festival.
You can checkout the Chasing Light website here: http://www.iamchasinglight.com/

Musicians Wanted- Submit your song to an Austep Music compilation CD and have it mastered by internationally renowned Daniel Fournier, distributed to 50+ radio stations, 100+ digital stores, and more.

Product added to the cart. You can review you cart here